Two days in a row with good enough weather to fly!  What is the world coming to?

Today, I got a treat.  My surrogate flight instructor and I took a little trip south of TTA to visit a couple of new airfields for actual short and soft field landings.  Well, the airfields are new to me.

As we departed TTA, I donned the dog cone, (AKA Hood) and we flew south as I followed the Sand Hills VOR. Bumpier today, and there were some clouds around 2500, so I flew at 2000 msl.  It was pretty bumpy and kept me on my toes but hey, smooth air doesn’t help you get better.

My instructor said to me, “Go ahead and take that off.  There is a little airport over here that we’ll do a short field landing.”  The airport he was referring to was Carthage, BQ1.  Which has a BBQ place on the field that I hear is pretty good.  We didn’t have time to stop but I look forward to coming back at some point.  We pretty much turned around and took off again.  The trees came up pretty quickly to which I was a little nervous but we cleared them with no issues. It was a good experience to actually get to do it at a place where you have to do a short field.

I was instructed to turn south and we headed past SOP and landed at a small grass strip.  It was so cool… actual soft field experience as well.  Another treat was to checkout out a couple of airplanes, one of which my surrogate flight instructor flies for fun. 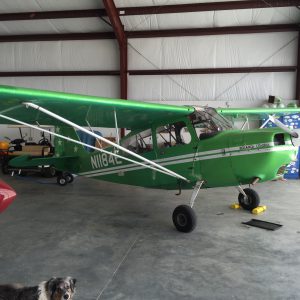 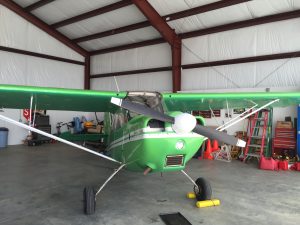 As we took off, we headed toward SOP which was not too far north.  Here I practices a soft field landing and soft field takeoff.  Those are my week points.  The landing was awesome. The takeoff, I lifted a bit out of the ground effect and settled it back in but it was not very smooth.  I can do better.

I put the dog cone back on and followed some vectors, holding altitude and airspeed.  It was really bumpy now, so it was a challenge.

The ride back was uneventful other than a couple of unusual attitude scenarios which I handled pretty well.

I landed back at TTA with another soft field.  It was ok, a little harder than should be but not too bad.

Today I felt like I was a part of the pilot community.  When we landed at the grass strip, there were quite a few guys hanging around the hangar swapping stories and what not.  I was welcomed into the group without hesitation.  It felt good…. and I got to fly.  How cool is that.

My little 152 amongst the bush planes

The home stretch, checkride in sight!

Polishing up for the CheckRide